Since the day that Father Ryan called and asked if I would consider being this year’s Commencement speaker, my mind has been filled with ideas as to what words of wisdom I could offer this class. I received input…both solicited, and unsolicited… from family and friends….I was told, be short, but not too short, add some humor, but not too much humor, talk about personal life experiences, but not enough to be boring!

When Father Ryan first spoke to me, he said I had a story to tell…I only wish now that he would have told me what that story was; it would have made my task here today a lot easier. As you heard from my introduction, I am a King’s graduate. I sat in those seats 32 years ago with the same feelings of excitement and trepidation that most of you are feeling now. Looking back, I was clueless about what my life would be like. I knew I wanted to have a career and a family, but I didn’t know how much of a challenge that would be. I started out in public accounting but left when I decided to get married  …I then went to work for our family tire business. We had 5 stores and although I was busy, I was able to balance both a family life and work. Things are a little different now, …. we have 45 stores and each day presents a challenge. Customer needs, vendor needs, employee needs, family needs…and they can reach you by email, text, cell phone and social media…there are days when my head spins from morning to night. When I graduated, we just had land lines…that’s how old I am… I can only imagine the possibilities that will exist for this graduating class.

But I don’t think that the overabundance of mobile media access was the story Father Ryan wanted me to tell you about. So I started thinking like a parent of a graduate…as a parent, what would I want to say to my son or daughter on their graduation day…..and that idea made me laugh, because as many parents know, if we say something, it is totally wrong, but if some stranger on the street suggests it, it is the best idea they ever heard! So with that said, I would like to direct my comments to all the graduates and to my son Tim, just think of me as some random stranger!.....

I can tell you one thing….. no one could be more honored to stand in front of you today….. I may not be the prominent politician, or the popular athlete, or a Nobel Prize recipient, but I am a proud parent, and a faithful King’s College alumnus and I truly have given much thought about what I want to say to you!

A friend of mine, who is a surgeon, recently wrote a novel…I asked him “why?”. His response….” no one is going to remember me for all the hips I replaced…this novel will be there forever”. I am not suggesting that all of you go out and write a novel…I’m thinking of something a little more simplistic.

You all have your degrees, as do thousands of other graduates of the class of 2015 from colleges and universities across the country. You will all enter the job market in one facet or another and most of you will excel in the job for which you have been educated. But when you enter the “real world”, a world filled with challenges and choices, you will come to a point where you have to make a decision that might not reflect the person that sits before us today, or you might find yourself under stress and you might act in a way that is not like the person that you are today. That’s when I’m asking you to stop and remember these words…BE A BETTER PERSON….raise the bar on how you act as a person. It might start simply by replying to an email in a positive tone versus a negative one or you might complement a co-worker for a job well done. It takes some thought….you have to put effort into it. But your new attitude might catch on…and others might respond in a similar way.

This idea is not new…many of you have heard it before. There is a book called “Everything I Need to Know I Learned from a Little Golden Book”…Do you remember this line of books? They were books about how to deal with real life situations. You probably read them in preschool or kindergarten…it’s a little humorous that you are graduating from college and I’m telling you to go back and remember what you learned in pre-school!! If you find yourself near a bookstore, pick up one of these books….It’s a humorous guide to life for grown-ups. It reminds us about what it takes to live a happy and fulfilling life.

Maybe some of you have seen the television commercials and billboards from VALUES.COM…A billboard with a picture of Nelson Mandella and a tag line…What can one person do? And then the word “INSPIRATION” or a picture of the tennis player Andre Agassi working with children and the tag line..STILL SERVING and the words “Giving Back”( These are worth looking at, so when you have time, AFTER I’M DONE SPEAKING… google values.com and get some ideas)… But at the end of each advertisement or billboard it asks you to do something…it asks you to PASS IT ON… PASS ON CONFIDENCE, PASS ON OPTIMISM, PASS ON KINDNESS, PASS ON CHARITY…..and that’s what I’m challenging you to do today… Do something in your life that is worth PASSING ON!

Let me tell you about a challenge I faced recently: Each year the executive management team of our company meets to determine the goals for the upcoming year. They are usually financial in nature…increase Gross Profit, increase billed labor, etc. This year when we met, my brother, who is the President of our company...and also a King’s grad…said he had another type of challenge for us. He wanted to improve the corporate culture of McCarthy Tire. I put on my best poker face and nodded in agreement like I always do when my brother gives us a directive (It is a good technique to learn when you are talking to a boss) But as he spoke, I looked up the definition of corporate culture……it read “how a company’s employees and management team interact with each other and handle outside business transactions.” My brother spoke to us about companies like Google, whose value phrase is “Don’t be evil”, and Wegman’s Supermarket that heralds the values “caring” and “respect”. He spoke about new hires that not only are the most talented in their field, but also best fit our corporate culture. Our company is in its 89th year…we are third generation owned and the 4th generation is heavily entrenched in the day to day operations. This is a unique story and speaks volumes to our culture and heritage. Today, many employers like the ones I mentioned, are looking for employees that not only have the “degree”, but also the values that engulf their corporate culture. 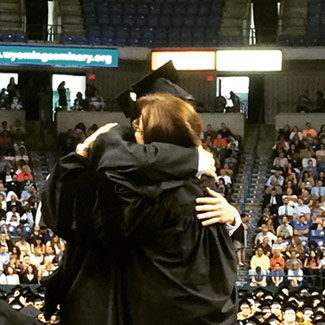 Here’s where you new graduates come in… A company’s culture develops organically over time from the cumulative traits of the people it hires. So you newly hired graduates have the ability to enter various fields… and make a real difference…right from the start by the way you interact with people. Collectively you will reach hundreds of employers. You might be at the bottom of the ladder when you first start, but eventually you will move up, and as you do, you will have the ability to influence even more people. It’s a simple task…you already did the hard work getting the degree. So challenge yourself to follow one of the tag lines on values.com, or create your own tag line….and remember…Pass it On!

And as long as you are willing to be a positive influence in the work place, let’s take it one step further.

My father, who passed away in January, was the greatest teacher I ever had. He was also a King’s grad and I bet if you looked at his GPA, you would not have been impressed. He was not book smart, he was people smart. I’ve heard stories over the years that my mom use to help him with his writing assignments, so I think it is pretty fitting today that she accepts an honorary degree in his memory.

My father had a saying that he instilled in all of us…what we are blessed with, we are to share with others. You could give of your time, your treasure or your talent…but you needed to give back to your community…to your neighbors. At his wake, there was a 3 hour wait in line….a few thousand people braved one of the coldest nights of the year to come and give tribute to a great man. These people did not come to pay their respects to a great tire salesman…he was good at what he did, but as he used to say…all tires are round and black, it’s not that difficult! These people came because of the “good person” my father was.

And as the family stood by the casket, we were met with stories about his generousity…his values…his integrity. We heard from a family that had car trouble as they were set to go on vacation…the car was packed and the kids were stuck sitting in our showroom. My father not only got them on their way quickly, he bought them breakfast and didn’t charge them because he said “no person should ever start their vacation this way”.  These people had never met my dad before that day. We heard from another person that was employed by us 30 years ago…my father worked with him side by side on a cold winter day, and when they were done, my dad shook his hand and said…thank you…and he slipped him $5.00 to get a pizza.

After the funeral, we talked about the stories each one of us had heard and one was more impressive than the other. My father was remembered by so many because he was a good person… he was generous, he had respect for others, he had integrity…. He had every characteristic I mentioned earlier.

Each one of you has the chance to be that type of person…to leave a lasting impression on those you come in contact with during your life. Start now…there is no need to wait....as I say to many of the younger generation I work with…look up from your iPhone, or your Ipad….and go out into the world and make a difference. It’s your world now…it’s your world to make better!

One final word….a shout out to the class of 2015 that resided at 202 N. Main street with my son Tim….thank you for giving me all this gray hair!...and speaking for all the parents here today…we are so very proud of your accomplishments…have a great life!!!