King’s Theatre Department to stage bedroom farce “Whose Wives Are They Anyway?” in November

After sending their wives shopping in New York, two well-meaning business executives, performed by Allen Bonk, Wilkes-Barre and Alan J. Krier, Maple Shade, N.J., anticipate a fulfilling golf weekend until their new CEO unexpectedly arrives and wants to meet their wives, announcing: "anyone who goes to a resort without their wife won't be employed with me."

The golfers must hastily produce wives - one man talks the sexy receptionist into portraying his wife, but the only other person available to play the other man's wife is the other man. This comedy culminates with the arrival of the men’s actual wives.

The George P. Maffei II Theatre is located in the Administration Building on North River Street. Tickets are $12 for general admission, $7 for senior citizens, and $5 for King’s alumni and non-King’s students. For more information on upcoming performances or to reserve tickets, visit the website  http://whosewives.brownpapertickets.com or call the box office at (570) 208-5825 or e-mail boxoff@kings.edu. 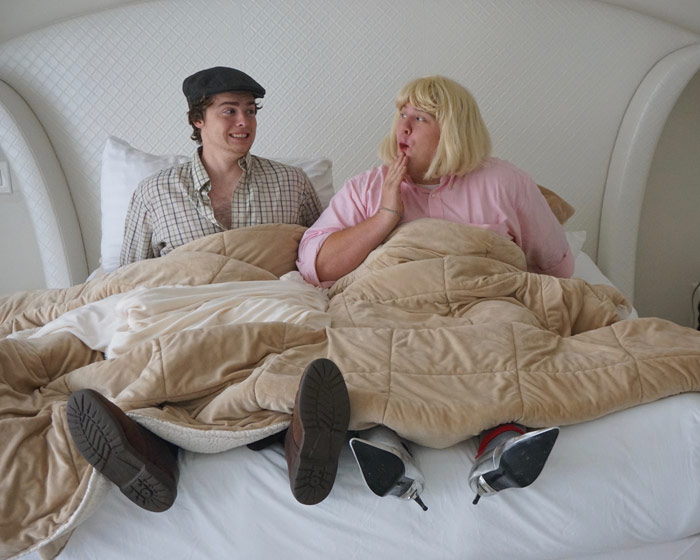 Pictured from left, businessmen Alan Krier and Allen Bonk’s tale to satisfy their new boss leads to shenanigans in playwright Michael Parker’s bedroom farce “Whose Wives Are They Anyway?” King’s College Theatre Department’s production of the play will be held at 7:30 p.m. on Nov. 10-12 and Nov. 17-19 and at 2 p.m. on Nov. 13 in the George P. Maffei II Theatre.