February 1, 2017 - Anne Noone, a Pittston resident has served in various positions at King’s College since 1966, was recently selected to receive the Spirit of Holy Cross Award, an annual recognition by the United States Province of Priests and Brothers of the critical importance lay people play in living out the vision and mission of Holy Cross founder Blessed Basil Moreau, C.S.C., to make God known, loved and served in education, parish and mission settings.

During her years at King’s, Noone has worked in both academic and administrative offices, currently serving as executive assistant to Father John Ryan, C.S.C, the college’s president.  She has also worked in the physics and  mathematics departments and for various departments in the business division.  She also worked in the College’s Academic Affairs Office and for the dean of the McGowan School of Business.

Noone was honored at a dinner held at Moreau Court, the residence for members of the Holy Cross Congregation serving King’s and the local community.  The dinner was held in January as part of activities held in recognition of Blessed Basil Moreau’s life. 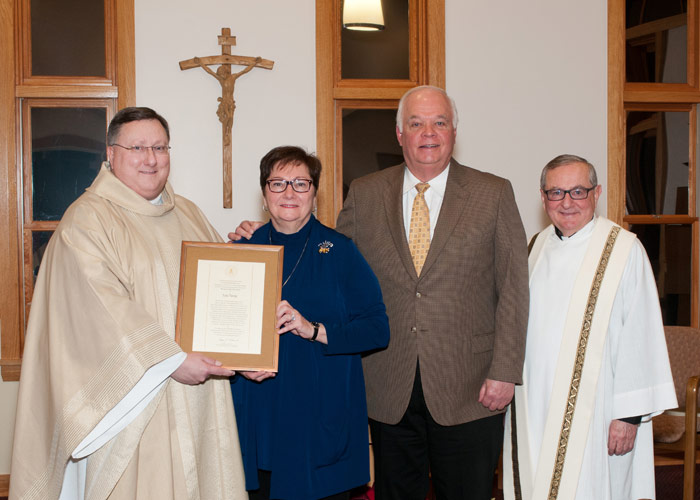 Pictured, from left, is Father Walter Jenkins, C.S.C., superior of the Holy Cross Congregation of priests and brothers at King’s College; Noone; Frank Noone, Anne’s husband; and John Ryan, C.S.C., King’s president.