September 19, 2017 – The King’s College Theatre Department kicks off the season with performances of the Tony Award-nominated musical, “A Year With Frog and Toad,” at 7 p.m. Sept. 28-30, and Oct. 5-7, and at 1 p.m. Sept. 30 and Oct. 1 in the George P. Maffei II Theatre. Designed for young audiences, the production will be offered by King’s Theatre with $3 discounted tickets for children 12-and-under during Thursday and Friday night performances.

Based on the book by Arnold Lobel and featuring a score by Robert and Willie Reale, this whimsical story follows the cheerful Frog and grumpy Toad through four fun-filled seasons as they celebrate friendship and the differences that make them unique.

“We are very excited to share the magic of theatre with the young and the young at heart,” said director David Reynolds, associate professor, King’s Theatre Department. “The whole family is sure to love it.”

The George P. Maffei II Theatre is located in the Administration Building on North River Street. Tickets are $12 for general admission, $7 for senior citizens, and $5 for King’s alumni and non-King’s students. For more information on upcoming performances or to reserve tickets, visit the website http://www.brownpapertickets.com/event/3093007 or call the box office at (570) 208-5825 or e-mail boxoff@kings.edu. 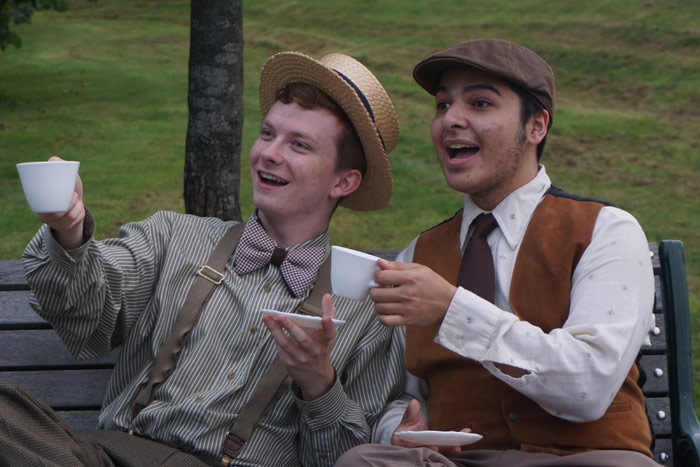 Rehearsing for upcoming King’s College Theatre Department’s production of the musical “A Year With Frog and Toad" are Dylan Koch and Andrew Martinez. Performances will be held at 7 p.m. Sept. 28-30, and Oct. 5-7, and at 1 p.m. Sept. 30 and Oct. 1 in the George P. Maffei II Theatre.