September 25, 2017 – Lorena Beniquez’s photographs are designed to preserve the anthracite history of Northeastern Pennsylvania landmarks, including the Huber Coal Breaker in Ashley, St. Nicholas Coal Breaker near Mahanoy City, Steamtown National Historic Site in Scranton, and Eckley Miners Village in Weatherly. She will display her collection of photographs during a free public exhibition, “The Last Coal Breaker,” from Monday, Oct. 2, through Friday, Nov. 3, in the Widmann Gallery at King’s College.

The grandchild of a coal miner, Beniquez has taken photos of the Huber Coal Breaker for more than 20 years. After the breaker was torn down in 2014, she began documenting the abandoned “Old Saint Nick”, a symbol of Schuylkill County’s rich mining history. One of the world’s largest coal breakers, the demolition of “Old Saint Nick” began in 2013 and continues today.

Beniquez’s photographic study of the region’s disappearing anthracite history are the subject of her book, titled “Lost Coal Country of Northeastern Pennsylvania,” published by Arcadia Publishing in 2017.

“When I started taking photos in my twenties, it was a way to understand where I came from and what my grandfather endured as a coal miner,” said Beniquez. “Now I want to communicate the finality of this history and preserve the memory of those who have worked in the coal industry for future generations.”

A professional photographer/videographer for more than three decades, Beniquez’s work has been featured locally on WBRE-TV, WVIA, CNN and “The Today Show.” She earned a bachelor’s degree in mass communications from Mansfield University.

Beniquez will discuss her research and collection of photographs from 6-8 p.m. on Friday, Oct. 6, in the Widmann Gallery, Sheehy-Farmer Campus Center, located between North Franklin and North Main streets. The exhibition is free and open to the public. Gallery hours: Mon. through Fri., 9 a.m.- 4:30 p.m.; Sat. and Sun., as arranged. The Gallery is closed on national holidays and during scheduled breaks throughout the academic year.

For more information, contact Michelle Leonard, Widmann Gallery Coordinator, at (570) 208-5900, ext. 5328, or visit the Experiencing the Arts Calendar at www.kings.edu. 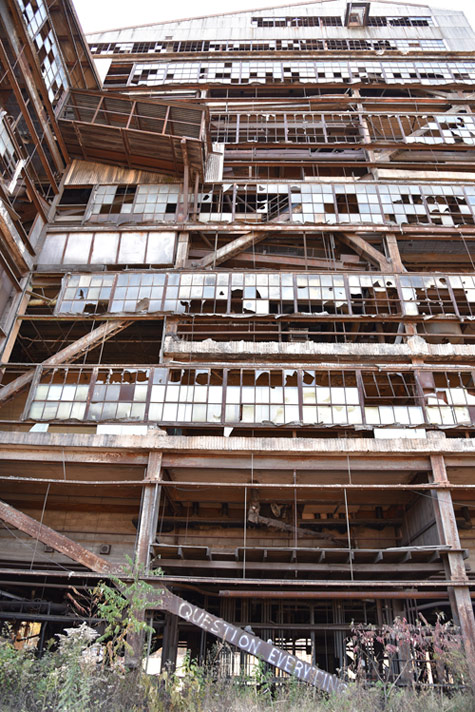 “Question Everyting,” photograph by Lorena Beniquez will be one of works depicting coal mining history during “The Last Coal Breaker” exhibition held Oct. 2-Nov. 3 in the Widmann Gallery at King’s College.

Editor’s Note: the image’s name is not a typo: It should read “Everyting"