May 22, 2019 – During Commencement Weekend, May 18 – 19, 2019, King’s College President Rev. John Ryan, C.S.C., Ph.D. conferred Alumni Awards upon five distinguished alumni who have demonstrated remarkable contributions to their professional fields, to the communities in which they live, and to King’s College. Members of the faculty, staff, administration, and alumni assisted the president in the selection process from among nominees submitted by alumni and friends of the College.

The Awards for Outstanding Professional Achievement (Arts and Sciences and Business) honor alumni who have distinguished themselves through exceptional professional achievement. Dr. John Godleski ’65 is a scientist, professor, and researcher who served on the faculty of Harvard Medical School, Brigham and Women’s Hospital, and Harvard TH Chan School of Public Health from 1978-2017. Dr. Godleski’s research has had significant impact in determining the effects of air pollution on pulmonary and cardiovascular health around the world. He retired from Harvard Medical School in 2017 and is currently a Professor of Pathology, Emeritus. He continues to work through his company, John J. Godleski, MD PLLC, as a consultant in environmental particle and nanoparticle inhalation and is a recognized expert in pulmonary pathology, environmentally related disease, and the diagnosis of foreign material in tissues throughout the body. Dr. Godleski resides in Milton, Mass.

Maureen Hanlon, Esq. ’87 is the president of Onexim Sports and Entertainment Holding USA, Inc., the owner of BSE Global. BSE Global is the controlling owner of the National Basketball Association franchise, the Brooklyn Nets, their NBA G League team, the Long Island Nets, and their NBA 2K team, NetsGC. BSE Global also owns the Barclays Center in Downtown Brooklyn, NYCB LIVE, home of the Nassau Veterans Memorial Coliseum, in Uniondale, N.Y., and is co-owner of the newly renovated historic venue Webster Hall in the East Village, New York, N.Y. Hanlon earned her Juris Doctorate from Columbia School of Law in 1990, where she was a Harlan Fiske Stone Scholar. She is a member of the New York State and New York City Bar Associations and was named to Sports Business Journal’s 2016 Power Players: Outside Counsel. A native of Wyoming, Pa., Hanlon resides in New York City.

The Robert J. Ell Alumni Award for Outstanding Service to Alma Mater is named for Robert J. Ell ’50, the first Director of Alumni Relations at King’s College, and is conferred upon an alumnus or alumna for extraordinary service, dedication, and commitment to King’s College. Todd Serafin ’89 serves as Vice President of Commercial Lending for Luzerne Bank. In addition to his mentorship of King’s College students through the McGowan School of Business Forum, he has volunteered for the King's College Community Phase of its Annual Campaign and served as Chairman of the Community Phase of the Annual Campaign in 2011.  Serafin is an active volunteer with many local organizations including the Wilkes-Barre Catholic Youth Center, YMCA, the Osterhout Free Library, MetroAction, and the Wilkes-Barre Kiwanis. He is a graduate of Executive Leadership Wilkes-Barre. Serafin and his family reside in Wilkes-Barre.

The Award for Service to Society is presented to an alumnus or alumna who has distinguished himself or herself through selfless and caring personal commitment to benefit others. Margaret Bart ’77 began her career working in quality control at CertainTeed Corporation in Mountain Top, Pa., where she eventually rose to the rank of plant superintendent, the first-ever female superintendent at the company. Due to a diagnosis of Multiple Sclerosis, Bart was forced to retire early in her career. Combining her management skills, her love of animals, and her experience with horses, Bart began a second career path that has developed into a beloved community institution. Bart is the founder and president of Blue Chip Animal Farm Refuge, a non-profit, 501(c)(3) organization that provides long-term and permanent care to displaced and discarded animals and was a first-of-its-kind no-kill animal shelter. Bart currently resides in Dallas, Pa.

The Leo Award is presented to an alumnus or alumna within 15 years of their graduation who has demonstrated outstanding achievement in his or her professional or community activities. Named for the King’s College mascot, it suggests the energy, pride and sense of purpose that the recipient personifies. Dr. Patrick Ganzer ’08 graduated summa cum laude from King’s with a dual degree in Neuroscience and Psychology. He went on to earn his Ph.D. in Biomedical Engineering and Science from Drexel University in 2013. A neurotechnology research scientist who has made significant contributions to the fields of neuroscience and biomedical engineering in the last six years, Dr. Ganzer has conducted groundbreaking research dedicated to focusing on treatments that enhance brain and spinal cord change to facilitate recovery of function after spinal cord injury. Currently, Dr. Ganzer serves as a Principal Investigator of Bioelectric Medicine at Battelle Memorial Institute in Columbus, Ohio, the world’s largest non-profit research organization. His scientific work is currently being translated to clinical trial applications to help patients suffering from neural disease. Dr. Ganzer currently resides in Columbus, Ohio. 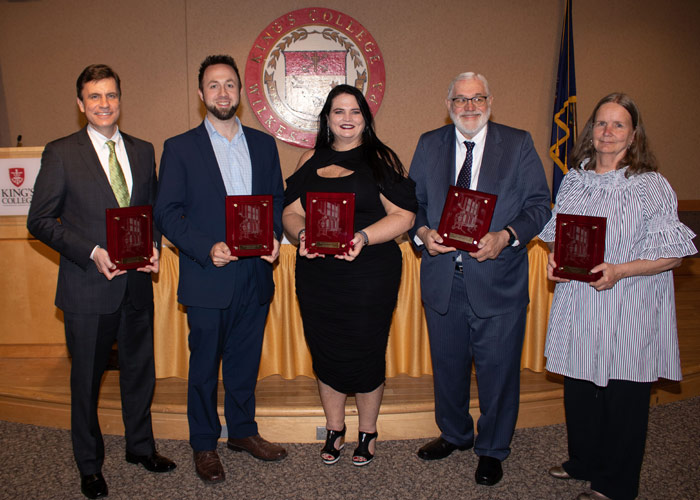