Feb. 15, 2014 - Artist Tom Sorresso uses the medium of enamel spray paint to create unexplored worlds and delve into the human imagination. He will display works created with enamel spray paint during a free, public exhibition, titled “Shadow Galaxy,” from Monday, March 10, through Monday, April 14, in the Widmann Gallery at King’s College.

“After painting in this style for twelve years, I have begun to find a certain quality that is all my own,” Sorresso said. “Every piece I intend to show is going to tell a story of the vastness of the universe and a person’s creative imagination.”

The son of a boardwalk performer in Seaside Heights, N.J., Sorresso learned to create images using enamel spray paint during live exhibitions with fellow performer and “space painter,” Cosmo Kid. He continues to exhibits his works primarily in live performances, including showings at the Bloomsburg Fair, Vir-ginia State Fair, and Seaside Heights, N.J. He earned an associates degree in graphic design at Luzerne County Community College.

Sorresso will discuss his craft during a Meet-the-Artist reception from 6-8 p.m. on Friday, March 21, in the Widmann Gallery, Sheehy-Farmer Campus Center, located between North Franklin and North Main streets.

Gallery hours: Monday through Friday, 9 a.m. - 4:30 p.m.; Saturday and Sunday, as arranged. The Gallery is closed on national holidays and during scheduled breaks throughout the academic year. For more information, contact Michelle Leonard, Widmann Gallery coordinator, at (570) 208-5900, ext. 5328. 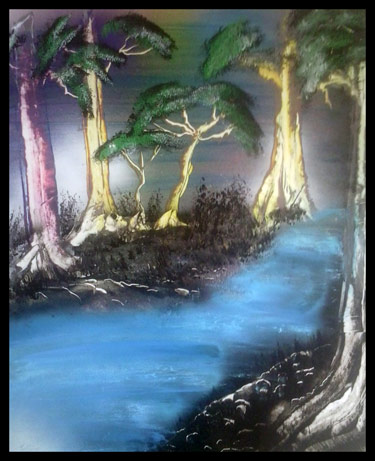 “Seedlings,” a enamel spray painted work by Tom Sorresso will be on display in the “Shadow Galaxy” exhibition in the Widmann Gallery at King’s College.