November 19, 2014 - “When you walk these halls of King’s on the Square, you can feel the vibrancy, you can feel the life,” Father John Ryan, C.S.C., King’s president said at opening ceremonies for the building in late September. “Our students create that energy and you can feel it, now more than ever in downtown Wilkes-Barre,” he added.

Thanks to a donation from Panzitta Enterprises, Inc., the local company that served as general contractor for the King’s on the Square project, there will be another kind of energy in the building, solar.  The company has donated a total of 214 solar panels that are being installed on the roof of the building.  Panzitta Enterprises purchased the panels and is paying for the installation.  The company will maintain ownership of the panels and will donate the generated power to King’s.

The installation will mark the first known commercial application of solar energy in downtown Wilkes-Barre.

The energy collected by the solar panels will subsidize the existing electric utility consumption for the building.  According to projections from Endless Mountains Solar Services, LLC, the Wilkes-Barre-based contractor installing the panels, the panels will generate approximately $500,000 worth of electricity during their 25-year lifespan.

“We chose to fund this project for several reasons,” said John Panzitta, president of Panzitta Enterprises, Inc., and one of seven members of the Panzitta family to graduate from King’s. “It will allow King’s to use money that would have gone to utility payments to educate students, reduce its carbon footprint, and advance its sustainability efforts.”

“The King’s community is appreciative to Panzitta Enterprises for this thoughtful gift that will result in measureable progress for the College toward a goal in the 2013-2018 strategic plan to make our campus more efficient, sustainable and attractive,” said Father Ryan.  “By incorporating the solar panels, the carbon footprint of the building will be decreased by an estimated 2.6 million pounds of carbon dioxide over the life of the panels.” 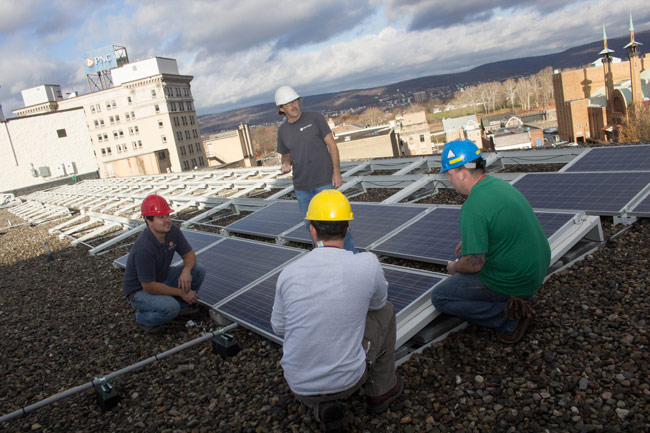