"Good afternoon family, friends, faculty, staff, administration, honored guests and of course the Class of 2015. I have to start by saying how honored I am to stand before you today and to speak on behalf of my class.

From my first weeks at King’s I found a home with Student Government. I can remember being told that I was elected to be a voice for the class and that responsibility was something I took to heart. Today I would like to continue that role by allowing others to be heard. Several weeks ago I asked my fellow classmates to submit quotations about our experiences at King’s and throughout this speech you will hear not only from me, but from them as well.

Saying King’s College has meant a lot to my 400 classmates and I is an understatement. Not only has King’s defined our lives for the past four years, but King’s has made them the most memorable yet. A typical commencement speech will chose not to focus on an end, but on a new beginning; where we are all headed and how we plan to pursue our aspirations in the coming years. But that conversation will be had for weeks to come as we celebrate with family and friends. So instead today, for just one moment longer, I would like to take a step back and focus on our time here at King’s. Specifically, why we all chose King’s in the first place, why we stayed, and how King’s became our second home. As Erica Montante, a psychology major and member of the Class of 2015, once said, “If someone asked me one thing I learned at King’s, it would be that moments turned into memories and that friends turned into family”, and for the rest of this speech I would like to tell you how that happened for each and everyone one of us.

With thousands of colleges across the country and several within Northeastern Pennsylvania each of us chose King’s College, a small Liberal Arts College founded by the Congregation of Holy Cross. Was it our names written on the board outside of the admissions house welcoming us to campus as prospective students that sealed the deal, was it the AACSB accredited business school or the renowned Physicians Assistant program, or was it the fact that everywhere you turned someone was welcoming you and your family to campus? Not only did the admissions team welcome each and every one of us to campus, but so did the professors we met on our visits, the current students, and all of the staff members and administrators we bumped into throughout the day. The King’s community is something that each of us felt a part of from the moment we stepped on campus, aside from the great academic programs and the plethora of extra-curricular activities that King’s has to offer, it was the community that attracted us to say yes to King’s over four years ago. Caitlin Haenig a Physicians Assistant major could not agree more, when recalling one of her first visits to King’s Caitlin stated, “From the moment I came on my overnight my senior year of high school and stayed with the field hockey team here at King's I knew this college was soon going to be my home away from home. I had never met a group of girls so inviting”. Additionally, like many of us Tori DeGiosio a mass communications and political science double major felt a personal connection to King’s even before her first visit, Tori stated, “I originally looked at King's College because my mom and many of my aunts and uncles had studied here. I knew King's was a great school, but I never would have expected it to become my second home.”

Many of us chose King’s for the undeniable feeling of community that welcomed us to campus, but why did we decide that after our first semester, our second semester, etc. that King’s was our perfect fit for the next four years? I would beg to reason that it was because each of us realized that we were meant to be a part of the community that had welcomed us as prospective students. We were meant to be a Monarch and we were meant to figure out how that identity would shape us into the men and women we are today, about to walk across this stage and transition from King’s students to King’s alumni. Kaitlyn Globosits an accounting major may have said it best earlier this year during her senior reflection, “"Everyone in this room, (today this arena) is a Monarch and together we make this great community we call King’s College. And the best thing about being a Monarch is that this close-knit community we are a part of doesn’t end when we graduate, it continues, as we become alumni.”… and that is why we stayed. We stayed because without even being fully aware of it at the time something was telling us that we were meant to be a part of this community and not only from August of 2011 until May of 2015, but for years to come.

And that brings me to my final question: how did King’s become our second home?

I think that Ally Gardiner a senior athletic training major may have worded it perfectly, "The least inadequate definition for King's is home. I have spent an amazing four years in Esseff Hall, and I have learned that home is not made up of the surrounding walls, but the community of friends that have been by my side." Whether we met our friends on a SERVE trip, at a study abroad fair, through a sports team, during FYE, on a retreat, or on our floor freshman year, today we can all agree that we probably would not have made it through these four years without them. These friends, our professors, the staff, and the administration at King’s are what made this college become more than a institute of higher education for us and instead our second home. Other students like Michelle LaMaire, Victoria Ortolani, and Leann Dudash echoed this idea of a second home.

Ryan Boyle a finance and economics double major went on to say that, “King’s became my second home because it was here that I learned who I am. I have grown so much these past four years; I couldn’t imagine this growth taking place anywhere else.” And that is the second reason why King’s has become our second home, not only are the people we have met here so special, but the growth that we have all experienced over these fours years has been remarkable. Looking back on freshman year until now we can all agree that we have changed a lot. We are no longer hanging out in the lobbies of Holy Cross and Esseff until 3:00 a.m. or trying to figure out how we will get through our first semester and effective writing. We are now getting ready to sign our own leases, getting ready to get our first adult paychecks, and getting ready to embark on greater journeys of family and friendship that will define our lives. We aren’t those scared freshman walking around with their ID’s on their necks anymore, we are the Class of 2015 about to walk across this stage with academic regalia and tassels hanging from our caps.

As we experience this final moment together as King’s students and the Class of 2015 let’s not be sad that it is over, but overjoyed for now, for the rest of lives, this place will continue to be our second home, a connection we all share, and a place of meeting for years to come.

Congratulations Class of 2015 we did it!" 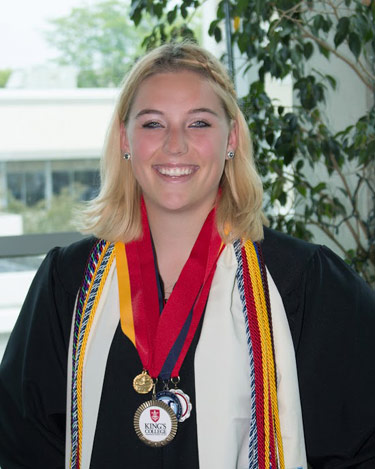