Dr. Ray Gamache, assistant professor of mass communications at King’s College, will present a lecture, titled “The Ethics of Famine Reporting: Gareth Jones and the Ukrainian Famine,” at 7 p.m. on Thursday, Oct. 24 at the Barnes & Noble bookstore in downtown Wilkes-Barre.

The presentation will focus on the famine reporting of Welsh journalist Gareth Jones, who traveled to the USSR in March 1933 at a time when all travel was banned by Soviet authorities. Jones defied the ban and provided newspapers with the most complete eyewitness account of an event that killed more than four and a half million people in Ukraine. Today that event is recognized as the Holodomor, which means “death by starvation.”

The presentation will be followed by a book signing of “Gareth Jones: Eyewitness to the Holodomor,” which was published by the Welsh Academic Press in August of this year, and recently released in the US.

Gamache’s book is the first academic study of Gareth Jones, and he recently presented his research on Gareth Jones at the University of Wales in Aberystwyth; the Norwegian Church Arts Centre in Cardiff, Wales; and the Association of Ukrainians in Great Britain, in London, England.

Gamache received his doctorate from the University of Maryland-College Park, and his bachelor’s and master’s degree in English from West Virginia University.

He is the author of “A History of Sports Highlights: Replayed Plays from Edison to ESPN,” and “The Water Is Wide: Notre Dame College’s Journey, 1976-2000.” Gamache also edited “Under the Bridge: Stories and Poems by Manchester’s Homeless” and “The Living Fire: Selected Poetry of Leo E. O’Neil, 1973-1997.” 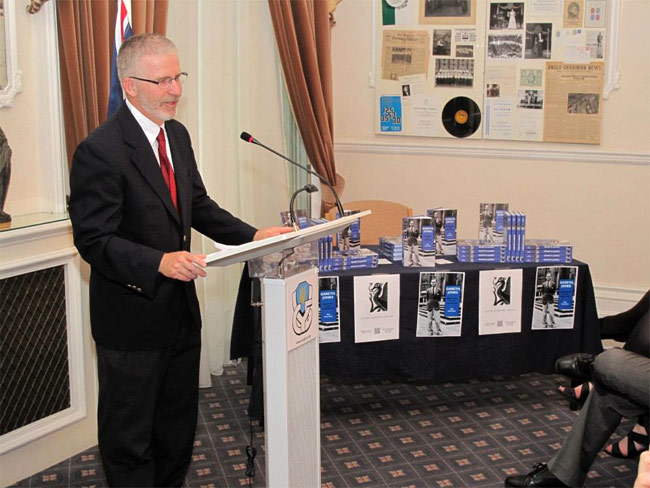