September 5, 2014 - Dr. Ray Gamache, center, an assistant professor of communications at King’s College before his recent retirement, and his wife, Jane, left, made a $5,000 donation to the College on the occasion of his retirement which enabled the Mass Communications department to purchase three high definition field cameras.

The funds have also been used to upgrade audio, lighting, and storage media in communications classrooms and labs and in the College’s full high definition television studio.

“We are proud that our Mass Communications students have access to the tools that will help prepare them for careers in broadcast television,” said Scott Weiland, Ph. D., pictured at far right, Mass Communications department chair. “Students are rolling up their sleeves and producing their own television shows through King’s College Television (KCTV) and our department team is very pleased to assist them in their efforts.”

Gamache joined the King’s faculty in 2011.  Prior to his arrival at King’s, he taught for more than 20 years at liberal arts colleges in Minnesota and New Hampshire.  He is the author of numerous books, including “Gareth Jones: Eyewitness to the Holodomor.” The book provides insight on Jones, now recognized as one of the first journalists to reveal the horror of the Holodomor, the Soviet government-induced famine in the early 1930s, which killed millions of Ukrainians. 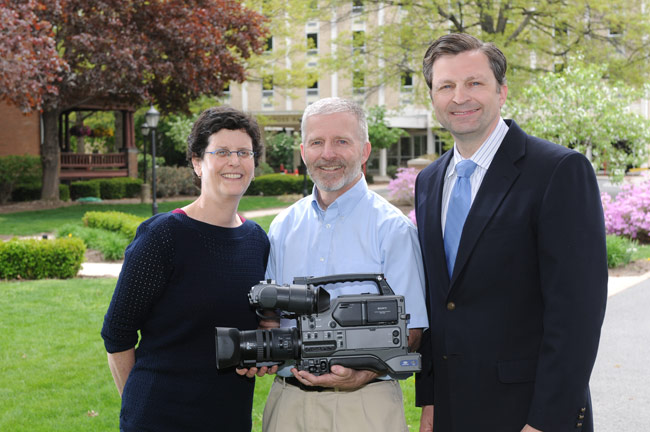