October 5, 2020 – The King’s College Board of Directors has announced that its president, Rev. John J. Ryan, C.S.C., Ph.D., will retire from his position effective June 30, 2021. At the time of his retirement, Fr. Ryan will have served King’s as its president for 10 years. During his tenure, Fr. Ryan led extraordinary enhancements at the College.

A Wilkes-Barre native and the former Dean of the William G. McGowan School of Business at King’s, Fr. Ryan has led an impressive series of initiatives that have positioned King’s for long-term success. In the last ten years, King’s has expanded its academic programs to include engineering, nursing, and exercise science. King’s now participates in 27 sports with the addition of men’s and women’s ice hockey, men’s and women’s track and field, women’s golf, and men’s volleyball, plus the recent launch of an Esports program. The campus footprint has been expanded and enhanced with the addition of the Richard Abbas Alley Center for Health Sciences on Public Square, the Mulligan Center for Engineering on North Franklin Street, the Chapel of Christ the King at the George & Giovita Maffei Family Commons on North Street, and the track and field complex at Betzler fields. All of these initiatives both enhance the student experience and position King’s as an attractive option in a competitive environment. Keenly aware of the need to achieve strategic growth responsibly, King’s fiscal stability, as evidenced by endowment growth, investment-grade credit rating, and budget surpluses, has been a hallmark of Fr. Ryan’s leadership.

Understanding that lasting outcomes are formed through collaboration, Fr. Ryan has led the College’s extended reach as a partner to others. These efforts have included King’s commitment as a caring neighbor in our city, as demonstrated through hundreds of thousands of community service hours worked annually and by acquiring decaying properties and bringing them to life, as well as a strategic ally with other respected higher education institutions from around the nation, such as the University of Notre Dame, Villanova University, Washington University, and Luzerne County Community College, to expand opportunities for King’s students. Fr. Ryan has built special relationships with our alumni, and he is often moved by their stories, their love of King’s, and their gratitude for the people of King’s who supported them as students. These stories inspired Fr. Ryan’s implementation of critical student-support initiatives like The Presidential Hope Fund.

“We are so grateful for Fr. Ryan’s leadership and his many accomplishments during his tenure as president,” remarked Tom Smith, Chair of the King’s College Board of Directors. “Through it all, he has remained the same steady, humble, grounded man of faith that he was when he assumed the presidency in July 2011.”

Throughout this extraordinary growth, King’s has continued to be a place guided by mission. Fr. Ryan is fond of quoting the College’s vison statement, which declares “King's forms graduates who will champion the inherent dignity of every person and will mobilize their talents and professional skills to serve the common good.”

“Serving as president of King’s College has been and is the greatest sacred privilege of my priestly ministry,” explained Fr. Ryan. “I look forward to supporting the college community as we transition to a new president.” A well-respected teacher, Fr. Ryan plans to spend more of his time back in the classroom with King’s students.

King’s has launched its search for a new president. The search committee will be led by members of the College’s Board of Directors and will include members of the Congregation of Holy Cross, as well as campus representatives. The next president of King’s is expected to begin in July 2021. 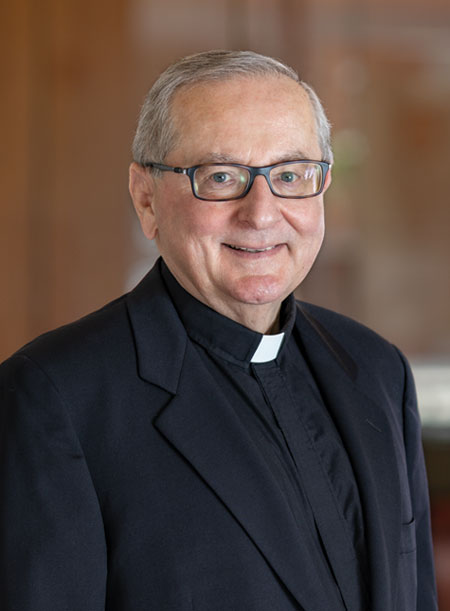