February 6, 2018 – The King’s College Theatre Department will present its 68th annual Shakespeare production with arguably the Bard’s most famous tragedy, “Hamlet” at 7:30 p.m. on Feb. 14-17 and 2 p.m. on Feb. 18 in the George P. Maffei II Theatre. King’s has offered theatre productions for local audiences since 1950, the college’s fourth year of existence.

From the first report of his father’s ghost through his desperate plan to avenge his father’s death, Prince Hamlet uncovers a world of deception and corruption as he grapples with his morality and mortality that will have devastating consequences for the kingdom of Denmark.

Directed by Dave Reynolds, “Hamlet” is considered by many Shakespeare’s finest play. In King’s production, Hamlet has been cast as a woman. Sophomore Ashley Surdovel of Topton will portray what is regarded as the most complex psychological portrait of a tragic hero written for the world of theatre.

“Ashley is an extremely talented young performer and the actor best suited for the role of Hamlet,” Reynolds said. “She has been incredible with the role. Working with her to discover Hamlet has been one of the highlights of my directing career.”

The George P. Maffei II Theatre is located in the Administration Building on North River Street. Tickets are $12 for general admission, $7 for senior citizens, and $5 for King’s alumni and non-King’s students. For more information on upcoming performances or to reserve tickets, call the box office at (570) 208-5825 or e-mail boxoff@kings.edu. High school matinee performances are available upon request. 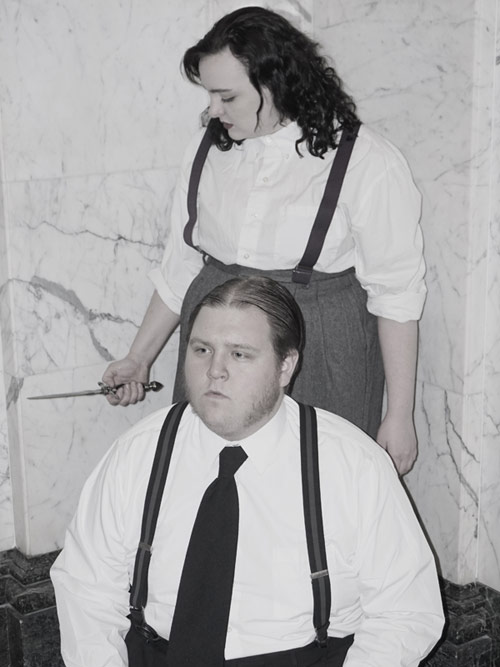 Allen Bonk and Ashley Surdovel rehearse for King’s College Theatre Department’s upcoming performances of Shakespeare’s finest play, “Hamlet.” Performances will be held at 7:30 p.m. on Feb. 14-17 and 2 p.m. on Feb. 18 in the George P. Maffei II Theatre. Surdovel will play the legendary character of Hamlet.