Oct. 30, 2015 - Professional actor and puppeteer James Godwin of New York City will perform as a guest artist for upcoming King’s College Theatre Department performances of award-winning playwright Tony Kushner’s “The Illusion,” at 7:30 p.m. on Nov. 12-14 and Nov. 19-21 and at 2 p.m. on Nov. 15 in the George P. Maffei II Theatre, located in the Administration Building on North River Street.

Godwin will create and build a large-scale puppet for the character, The Amanuensis, for which he will also perform and puppeteer. King’s students will gain hands-on experience working side-by-side with a professional actor during the production. Godwin’s appearance will be the first ever appearance of a professional actor in the 65-year history of King’s theatre.

Godwin is a founding member of the puppet troupe the Elementals, which has performed at the Jim Henson International Festival of Puppet Theater. His work has been presented throughout New York City, including venues such as P.S.122, Dixon Place, DTW, Franklin Furnace, LaMama and the Walker Art Center.

He has worked with Julie Taymor, Dave Chappelle, David Bowie and Aerosmith. His film and T.V. credits include “I sell the dead,” “Ice Age 2,” as well as “It's a Big, Big World” for PBS, “Saturday Night Live” and the forthcoming “StakeLand.” Most recently Godwin was the puppeteer Wyatt Cenac for “The Daily Show.” He also co-wrote and starred in the adult puppet variety stage show “Uncle Jimmy's Dirty Basement.”

Godwin's one man puppet and performance art show, “Lunatic Cunning,” was awarded best in show at the Puppeteers of America Festival and was the winner of the prestigious Jim Henson Award for Innovation. He recently created “The Flatiron Hex,” which premiered at Dixon Place in May 2015 and was praised by critics of “The New York Times,” “The Village Voice,” and “The Upcoming.” He attended The Columbus College of Art and Design in Columbus, Ohio.

Tickets are $12 for general admission, $7 for senior citizens, and $5 for King’s alumni and non-King’s students. For more information on upcoming performances or to reserve tickets, call the box office at (570) 208-5825 or e-mail boxoff@kings.edu. 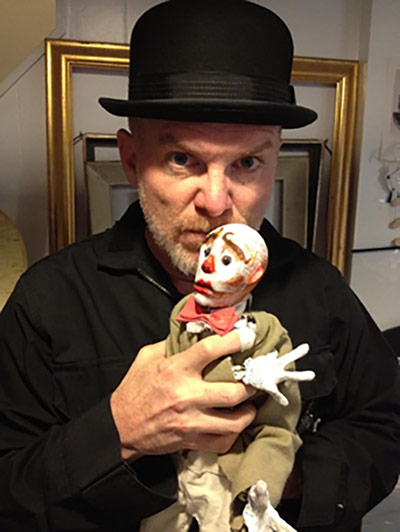