The King’s College Logos: Representing the College’s Mission and Spirit

This document serves as an in-depth guide to ensure that the King’s College academic and athletic brands are consistently applied across all communication platforms—from newsletters, website and social media, to clothing, uniforms and decals. We take pride in our academics and teams and they, in return, take pride in the brand they help to build year after year.

This is your brand. Respect and protect it.

The Mission Mark is used on the College’s website, institutional publications and digital materials but does not replace the traditional seal of King’s College.

The cross symbolizes King’s Catholic and Holy Cross mission and the deeply rooted belief that, like Christ, all people are called to empty themselves in love for others.

The anchors are a symbol of hope. Hope is fostered and strengthened in King’s students through volunteerism and service so when they graduate and go out into the world, they are inspired to serve others in tangible and meaningful ways wherever they may go.

The crown is a symbol of the royal authority of Christ, the King. The crown also symbolizes our responsibility to work to extend the reign of Christ in the world.

A recognized mark of excellence and stature in higher education, the shield holds the elements of the identity together as one form. It also symbolizes refuge and protection, which help convey the sense that King’s is a place where students engage freely in academic inquiry and explore deep intellectual questions with the support of those around them. 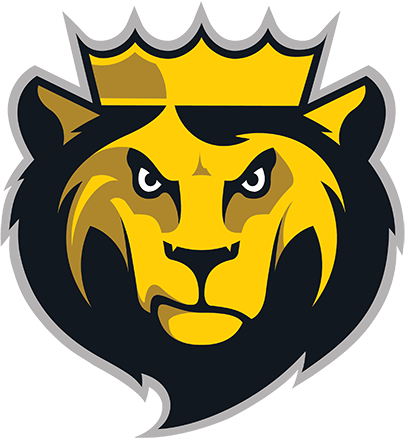 This image is a stylized representation of the King’s College mascot, Leo the Lion. In the first years of the College, the football team took the name the “Lions” based on the analogy between Christ the King, and the lion as king of the jungle. The lion mascot was eventually named Leo. Originally depicted as the “Leaning Leo” in the College Yearbook, the Regis, the iconic sculpture of Leo stands boldly in O’Connor Park.

Choplin Extra Bold: A slab serif typeface, has been selected for the “King’s” and “Monarchs” nameplates. While available in several weights, Extra Bold was chosen for primary use by King’s Athletics due to its prominent and eye-catching appearance. Although based on Choplin, the logo text has been slightly modified for use in the branding marks. As such, the words KING’S and MONARCHS used in the lockups must be a fixed art file. No attempt to reproduce and set the font is permitted.

These fonts should be used in all King’s Athletics display applications. Alternate fonts dilute our athletics brand. Adherence to these typefaces will help create a consistent and strong identity for King’s Athletics.

Please note: The Leo Logo is a graphic image. No alterations or substitution of fonts is permitted. 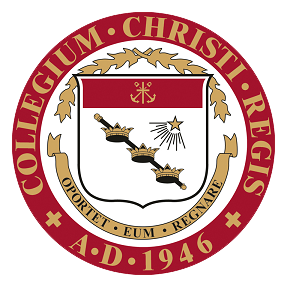 Since the College bears the name and is dedicated to Christ the King, the emblems associated with the Divine Ruler form the central motif of that portion of the seal devoted to the coats of arms.

The Cross and Anchors

The chief (upper compartment) displays the coat of arms of the Congregation of Holy Cross which founded and sponsors the College. The red field, the liturgical color of Charity, has been chosen to indicate the great love of Christ the King for the human race.

The Sceptre and Crowns

The regal sceptre with a mound at the top is a symbol of His divine power. This figure is accentuated by the three crowns to represent the triple Kingship of Christ: Potestas Ministerii (ministerial power), Potestas Magisterii (magisterial power), Potestas Legislativa (legislative power). The tincture chosen is gold, a precious metal associated with royalty, but the crowns are simple and not ornate to emphasize the humility of Jesus Christ the King.

The comet with the thirteen streamers is taken directly from the coat of arms of Leo XIII, the Champion of Labor, the emphasize the dignity of the laboring classes. This illustrious pontiff in his encyclical “Rerum Novarum” explained the rights and duties of Labor in accordance with the rules lad down by Christ the Teacher (Potestas Magisterii) and Legislator (Potestas Legislativa).

“It is fitting that He should reign.”

The King’s College Seal is reserved only for use on official academic materials. Acceptable uses include, but are not limited to, diplomas and other commencement materials, collegiate/scholarship certificates and correspondence from the president of King’s College. The Mission Mark or Athletic Marks should be used in all other instances.