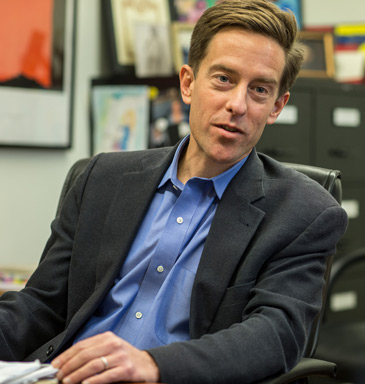 Dr. Bernard Prusak is Professor of Philosophy and Director of the McGowan Center for Ethics and Social Responsibility at King's College in Wilkes-Barre, PA. He was educated at Williams College; Exeter College, Oxford University; and Boston University, where he took his Ph.D. in philosophy. He then taught humanities and social sciences for three years in the Core Curriculum at Boston University and for seven years in the Center for Liberal Education at Villanova University, from which he moved to King's in fall of 2012 in order to found the McGowan Center.

Dr. Prusak's research focuses in moral and social philosophy. He has published widely in scholarly journals on such topics as parental obligations and children's rights, conscience, just war, religious liberty, the moral limits of markets, and the principles of cooperation and double effect; he also writes frequently for Commonweal magazine, where he worked as an editorial assistant before graduate school. He was an officer of the American Catholic Philosophical Association from 2009 to 2012 and has served on the editorial boards of Public Affairs Quarterly and Expositions: Interdisciplinary Studies in the Humanities, for which he edits the forum "Ethics in Focus." He is a member of the steering committee of the Catholic Social Teaching Research and Learning Initiative, a collaboration of faculty and administrators from Catholic colleges and universities across the United States, and he has been guest editor of three issues of the Journal of Catholic Higher Education. He also serves on the Wilkes-Barre General Hospital Ethics Committee, the Geisinger Wyoming Valley Hospital Ethics Committee, and the Ethics Advisory Council for Geisinger's MyCode Community Health Initiative.

Dr. Prusak's first book, Parental Obligations and Bioethics: The Duties of a Creator, was published in 2013 by Routledge. His second book,  Catholic Moral Philosophy in Practice and Theory: An Introduction, was published by Paulist Press in 2016. He is now working on a third book with the title Moral (Mis)Education: Ethics for a Fallen World.