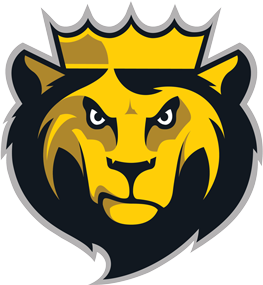 The new mark, an evolution of the traditional Leo character, was designed by Creative Communications Associates (CCA) to be a more focused representation of the fierce pride, energy and competitiveness of the College and its student athletes. (Almost 25 percent of King's undergraduates are involved in NCAA intercollegiate athletics.)

The new Leo is another step in the ongoing program of updating the College's look and feel to more powerfully reflect the academic and athletic vitality of King's College today. The new King's College logos were developed in response to a need identified during the research process for the College's 2013-2018 Strategic Plan, which determined that the marketing and branding of the institution needed to become a priority. The plan called for the creation of "a compelling and identifiable brand through market research and external support." The creation of new academic and athletic marks has been central to this process, with the design direction of the new logos being informed by market research surveys conducted by CCA for King's.

While the new academic mark (the Mission Mark, launched last fall) is designed to reflect the College's academic and intellectual strengths and its roots in the Holy Cross tradition, the new athletic mark focuses on the competitive zeal that has characterized King's College since its founding. "The new King's College academic and athletic marks are part of an ongoing strategic initiative to give the world a better understanding of who we are," says Corry Unis, King's vice president for enrollment management. "These new symbols are designed to be unique and distinctive, to create lasting impressions in the minds of prospective students, potential employers, alumni, friends and neighbors."

As with the academic logo process, the design of the new athletic logo was guided by a steering committee comprised of representatives from across the King's community, including students, faculty and staff members. "While the King's academic mark signifies the attributes of the Catholic liberal arts education and reflects the spirit of the Congregation of Holy Cross, the new athletic mark is a new, more forceful rendering of King's traditional Leo. Together, they inspire our students to fearlessly reach for new heights, make meaningful choices and serve others," says Unis. 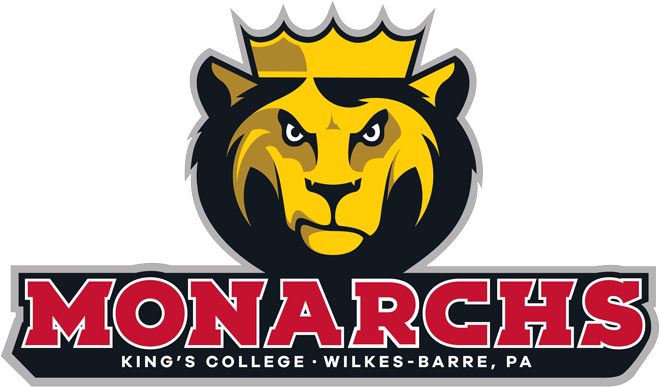 The new Leo mark is actually an evolution of the traditional King's Leo, reconceived to inspire future generations of Monarchs. The use of Leo to represent King's is almost as old as the College itself. An article in "The Crown" from the fall of 1947 includes the very familiar image of Leo leaning on a block K and refers to the lion as the "animal symbol of King's College…used to serve as a symbol of fighting spirit at King's much as the famous 'Army Mule' and 'Navy Goat' do for their respective schools." (For a brief period in the 1940s, King's sports teams were called the Lions. The Lions soon gave way to the Monarchs, but the character and spirit of the lion at King's endures in Leo.) The new Leo retains the spirit of the original image while giving it new focus and intensity.

The new Leo's first official duty will be to welcome prospective members of the next King's College class at this year's Accepted Students Day event (Sunday, March 29). The new Leo then will begin to make other appearances around campus, including center court in Scandlon Gym, and, come this fall, on team uniforms, with special prominence during Homecoming Weekend.

The elements that make up the new athletic mark are described below:

The new Leo, an intense, face-on close-up of Leo's head, emphasizes a fierce, competitive gaze, underscored by a challenging half-grin, a unique feature deliberately carried over from the original Leo character.

The Leo character is accented by a custom-designed typeface that complements the boldness and strength of the Leo image and serves as another symbolic representation of King's athletic prowess. The full mark will be available with either the words King's College or Monarchs in the new typeface under the image of Leo. (The King's College and Monarchs word marks can also be used as standalone elements. An additional line of text also will be used to customize the mark for specific team sports.)

A new block K in the new type face will be available for use on uniforms, apparel and other applications.

The new mark continues to use the traditional King's College colors of red and yellow. A graphic standards guide for the new logo is being developed that will include specific PMS numbers and define the use of other colors, such as gold and gray, for uniform and other applications.

The Mission Mark: A Strong Identity for a Strong College

The cross symbolizes King's Catholic and Holy Cross mission and the deeply rooted belief that, like Christ, all people are called to empty themselves in love for others.

The anchors are a symbol of hope. Hope is fostered and strengthened in King's students through volunteerism and service so when they graduate and go out into the world, they are inspired to serve others in tangible and meaningful ways wherever they may go.

The crown is a symbol of the royal authority of Christ, the King. The crown also symbolizes our responsibility to work to extend the reign of Christ in the world.

A recognized mark of excellence and stature in higher education, the shield holds the elements of the identity together as one form. It also symbolizes refuge and protection, which help convey the sense that King's is a place where students engage freely in academic inquiry and explore deep intellectual questions with the support of those around them. The deep black Garamond semibold font suggests the College's connection to the region's coal mining heritage.

The Mission Mark can be found on the College's website, institutional publications and digital materials. Please direct questions about the new King's College logos to the Office of College Marketing and Communications at 570-208-8380 or email.